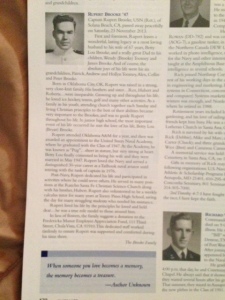 Today we received our March-April 2014 edition of Shipmate, the magazine published by the Alumni Association of the US Naval Academy. My husband is a 1967 graduate and my late father Bob was also an alumnus, graduating with the great class of 1947. Dad passed away on Veterans Day in 2005. I still really miss him.

Alas, the first thing I turn to is the Last Call section, which features obituaries by class year. I check both the 1967 and 1947 sections, dreading the sight of a familiar name amongst these pages. Once I get through Last Call, then I feel comfortable reading other news and articles.

Today I finished Last Call for both classes and didn’t see any names I recognized. Then I began reading the Class News. Midway through the 1947 Class News I read “The joys of our Holiday Season were dimmed by the following losses from our ranks: …………….Rupert Brooke……………,”

My heart sank when I read that Rupert Brooke had died. I felt that old familiar punched-in-the-gut feeling. Again. He was a dear friend and long-time tennis partner of my Dad’s. He and Dad had a standing weekly tennis date in San Diego (where they both retired) for years. Dad would invariably come back from one of his tennis dates with another uproarious story about “Good Ole Rupe” (as he always called him).

I only met Capt. Brooke (as I called him) a few times, but he was such a central character in my Dad’s life that he became one of those people who felt like an old friend in mine.   I knew that Capt. Brooke had been a Tailhook naval aviator and he regaled my father (who as a Navy dentist was a bit of wimp himself but loved vicarious flying) with stories of carrier landings and other thrilling daredevil aviator adventures.

At one point, shortly before my father’s cancer diagnosis, he told me that ‘Ole Rupe’ was very sick – that he had been diagnosed with an aggressive form of skin cancer and was not expected to survive.   I don’t recall my Dad ever being sadder.

As fate would have it, Capt. Brooke survived that bout of cancer while my father did not. In fact, Capt. Brooke missed my father’s funeral due to his own hospitalization.

Once Capt. Brooke recovered, I took my Mom to have lunch with the Brookes, and he wrote me a series of letters with stories about my Dad and offering encouragement to my son (who was pursuing an appointment to USNA himself). When my mother passed away three years later, Capt. Brooke was again quick to offer condolences and support, and in the years since we exchanged Christmas cards and I received occasional notes of encouragement.  I haven’t received anything from Capt. Brooke in the past couple years and in fact one letter I wrote to him last summer went unanswered so I feared a turn for the worse.

And now ‘Good Ole Rupe’ is gone. And I am heartbroken. Capt. Brooke was one of the few remaining threads to my Dad. The more time elapsed and the more friends and associates gone, the more “final” my Dad’s death feels. News like Capt. Brooke’s death stirs up sorrow for my Dad anew and begins another cycle of grief.

I turned to the previous Shipmate edition and found the obituary for Capt. Brooke (which I had apparently missed). I read that Capt. Brooke was born and raised in Oklahoma City and that he met his wife of 67 years when they were both in junior high school. He had two kids and six grandchildren and was a weekly calculus tutor for struggling students at a nearby high school. And I know that he was an inspiration to me and a beloved friend to my Dad. You will be missed, Capt. Brooke. Rest in peace. Say hello to my Dad for me. He will be delighted to have his favorite tennis partner back.