Face it, one big reason why we go to reunions is to feel young again.  We return to the places where we spent our youth, surround ourselves with the people we were with, tell stories about how awesome we were, and try to recapture a bit of the old magic. In the case of my law school experience, all roads lead to The Hut.

The Hut was a little dive bar just down the road from the law library.   It was really pretty awful; it was old and in disrepair, never clean, with sawdust on the floor, an old juke box that sometimes worked, and a couple of jars with hard boiled eggs and giant pickles on the counter.  As far as I know, no one ever ate anything at The Hut. 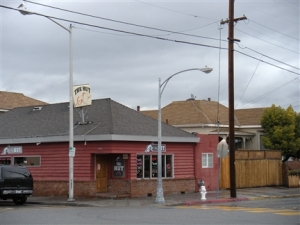 But almost every night, after a stressful day of classes and then studying until the law library closed, we would head over to The Hut for a drink before going home.  On Fridays and Saturdays, it might be several.  There was a nicer bar called Lord John’s, even closer to the law school, but we felt like we had to behave ourselves there. I think I drank more alcohol during my law school career than any other time in my life.  And I’m not sure how I still managed to get my JD.

The Hut was where friendships were forged, romances blossomed, broken hearts tended, advice dispensed, and legends born.  Rumor had it that some people actually lived in The Hut when they couldn’t make rent or didn’t feel like driving home during finals.

On the first night of my reunion weekend, I took my husband on a walking tour of the campus, which has changed significantly since I graduated.  The campus has expanded with large modern buildings replacing many of the older smaller ones.  Between the changes and my spotty memory, I was feeling disoriented.  But then I saw it – the Hut – decrepit as ever, surrounded by gleaming new buildings and parking garages.  Like an old ball of dust the vacuum cleaner left behind.  Hallelujah!  Lord John’s was gone, but The Hut survived. I was surprised at the depths of my emotions upon spying that old crappy dive.

Naturally, our reunion was not complete without a trip to The Hut.  As was typical of my law school days, after our class dinner I walked over with several of the guys. (Since my law school class was only 30% women, most of my good friends were male.) When we arrived, the bar was packed, the music blaring, the beer overflowing.  Just like the old days.

The Nightcap after our Class Dinner —- where else but The Hut

Even though it was by this time well past my bedtime, I was determined to party like my 24-year-old self.  But after less than an hour of screaming to be heard at my 50-plus-year-old friends over loud hip hop (the old juke box full of Stones music was gone and it was unclear who was controlling the music but obviously not a 50-plus-year-old) and getting screamed back at, yet still missing 50% of the conversation, and with my sensory abilities further impaired by beer, I was really starting to miss my 55-year-old self.

Then occurred a collective moment of clarity when one of my classmates abruptly and piercingly announced “Enough!! Time for bed.”  We each breathed a great sigh of relief, said our good-byes and promised to meet at The Hut in another five years God willing.  I headed back to my 55-year-old world, better appreciating the wisdom and relative calm of middle age, but thankful for the brief return to my younger days and with a greater respect for the stamina and energy of youth.