Now that I got some vitriol off my chest (see previous post) regarding our last Annapolis weekend, I’d like to do some gushing about President’s Circle Weekend at the Naval Academy.   Specifically, one of my favorite experiences was attending a seminar entitled “Ethics at the Naval Academy.” 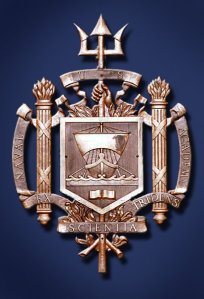 The US Naval Academy Seal

I had the option of 3 seminars, the other two being (1) Project Based Learning and (2) Athletic Excellence.  Both sounded interesting but less thought provoking. The topic of Ethics appeals to me for several reasons.  I have always been fascinated by the discussion of ethics, whether in the legal profession or the business world, and by how people apply ethical principles to difficult situations.  I was especially interested in how ethics is applied in military situations and what principles and frameworks are being taught to the Midshipmen. In order to obtain my law license, I was required to take a supplemental section of the Bar Exam on Legal Ethics  (no, that is not an oxymoron).   Ethics can be a rigorous form of mental gymnastics, trying to apply black and white principles to gray situations.  And where else are the situations as gray as the life or death decisions in the ambiguous modern world and our War on Terror?

The seminar was being held in the Planetarium in Luce Hall, which was cause for concern, since I always fall asleep in planetariums.   Inside was a distinguished looking professor and a panel of 4 midshipmen, 2 female and 2 male.  The professor introduced himself as CAPT Bill Rubel, USN (Ret), Distinguished Military Professor (which explains why he was distinguished looking). The Professor explained that the Department of Leadership, Ethics, and Law delivers a curriculum of over 35 core and elective courses in leadership, ethics, character and law that allow Midshipmen to better conceptualize military leadership and develop the skills critical to Officers in the Navy and Marine Corps, such as the ability to:

OK, all sounds great, I thought, but is this something that’s really taken seriously (back to ethics in the law or in the business world)?  What followed was a freewheeling participative discussion by both the PC attendees and the panel of Midshipmen, led by the Distinguished Professor that absolutely blew my socks off.  The Professor rarely stated an opinion but kept us all talking and THINKING. We discussed the following topics, among others:

At one point, one of the Mids (I wrote her name down because I was so impressed and I expect to see great things from her in the future) made an observation that really blew the entire room away.  After much discussion from the audience about how unprincipled young people are today, the Mid calmly and tactfully observed that her generation was raised by parents who would condone or at least tolerate cheating if it meant getting A’s and getting into the Ivy League school.

The Professor also showed a triangle to illustrate the 3 main, often competing, objectives in a military operation:

One of the other Mids shared that he and his company and room mates, based on the framework for ethical decisions that are taught at the Academy, often stay up until wee hours of the morning discussing different military and political scenarios and arguing what would be the right approaches and outcomes.

The last point the Professor made that I found impactful was a chart that demonstrated the components of effective leadership.  I didn’t snap a picture of it with my iPhone (I thought that might be unethical) so I don’t remember the specifics, but it listed the relative importance of the parties (e.g., country, team, etc.) and on the bottom was “self”.  The point being that an effective leader puts his or her self-interest last.  The Professor observed that this was what was so difficult about Plebe Summer.  Recently-graduated high school seniors, who were mostly hot-shots and superstars in their high school careers, show up at the Academy and the “self” gets knocked from first to last place, fairly abruptly and dramatically.  There was further discussion from the Mids about how, even though there is tremendous pressure at the Academy to succeed, there is also a leadership environment that encourages team rather than individual success.

I left the planetarium wide awake,  with that familiar mental gymnastics fatigue associated with ethical discussions, but a deep sense of hope that we have an upcoming generation of leaders who are schooled not only in technical aspects of military operations but the ethical and leadership facets as well.   It also made me wonder whether some of our country’s leadership problems stem from having fewer elected officials with military backgrounds, given that only 2% of the population is now serving in the military.  How about compulsory military service for politicians?