My friend Patti called me earlier this week and asked if I would be interested in a Girlie Adventure.  She’s a Girl Mom (she has two daughters) and knows that since I’m a Boy Mom, I don’t often get to do Female Stuff.  So when her daughters are home, she kindly lets me tag along.

This time, the Girlie Adventure was a trip to the LA Fashion District.  Patti explained that on the last Friday of each month, the designers sell their “samples” at rock-bottom prices.  Sales are cash only, and I was told to wear an outfit that would lend itself to trying on clothes in a crowd. Patti suggested that I wear a camisole and leggings, with a dress or something over them that I could easily take off for fittings, and bring a large tote bag for purchases.

Last night, I looked through my closet and found a yellow camisole and decided to pair it with my yoga pants.  Then I looked for a dress to throw over it, and the only possibility unearthed was a cheap, extremely dated, khaki thing I bought at Target years ago.  Since my yoga pants were black, I saw no reason why I couldn’t wear my comfy black Clark’s walking shoes (with my white sport socks). And because my Target dress was short-sleeved, I found an old tan sweater (made from bamboo fibers) from Sports Chalet to keep me warm. Being a Boy Mom, I was going for functional.

I first grasped the folly of my wardrobe strategy when Alana (Patti’s daughter) came to my front door this morning.  Besides being young and generally adorable, she wore black leggings and a chic blouse with matching sweater.  When I got to their car, Patti looked put together in leggings and a tunic.  And here I was heading to the Fashion District in my Wal-Mart Eccentric look.  So, for lack of other options, I decided to just embrace it. The Fashion Institute of Design and Merchandising is a few blocks from my former office, and fairly outrageous outfits are commonplace on the FIDM students, so I decided my best strategy was to carry myself like I meant to dress this way. 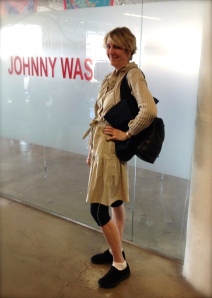 Modeling my Wal-Mart Chic at the Johnny Was showroom

As we drove to the Fashion District, I realized it was about four blocks from the office where I worked for twenty years. Of course, being a Boy Mom, I was oblivious.  After parking and walking to the LA Fashion Mart, we began our adventure in the New Mart building at the Johnny Was showroom, which was a little larger than my family room, only crammed with 50 women, some of them crazed.  This is where I got my first taste of Fashion Mart guerilla-shopping tactics.   There were racks of clothing samples, in no particular order; most of them size S or 6. There was one mirror at the far end of the room.  Women (many of them clearly not size S or 6) were ripping off their clothes (believe me, it wasn’t as appealing as it might sound) to try on clothes, and jockeying for mirror space. Patti saw some other woman carrying a blouse that she liked, so she stalked the poor woman for fifteen minutes until she finally dropped it.  (I offered to give the woman unsolicited negative feedback).  Then, when making purchases, there was an art to skillful haggling and negotiation over price.

At the Johnny Was showroom, I expended an inordinate amount of effort trying on piles of clothes, only to identify a mere two blouses that looked decent on me.  It was especially galling to see that no matter what Alana tried on, she looked gorgeous. I was heartened when two young shoppers asked me about pricing on samples.  I took that as an indication I looked like I belonged in this scene. (In fact, I wouldn’t be surprised to see my Wal-Mart Eccentric look take off at Fashion Mart.) I was bummed, however, when I inquired as to the price of my potential buy, and was told that the two items exceeded my entire self-imposed budget for the day (even after haggling over price).  On to the next showroom!

I finally found success in another showroom in another building (the California Mart) where I spotted a Vince Camuto dress that Patti and Alana agreed was flattering and that I nabbed for $25. I was doubly happy to have something to wear, other than Target, to a DVF exhibit at LACMA tomorrow. 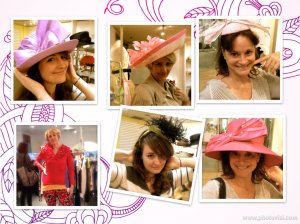 Once we each had at least one purchase under our belt, it was time to get goofy.  We agreed to look for outrageous photo opportunities and found success in the European Design and the Hats and Accessories sections.  We tried not to offend the shopkeepers as we identified some truly amusing clothing items and photographed ourselves in them.  The problem, again, was that no matter what we put on Alana, she still looked annoyingly cute. 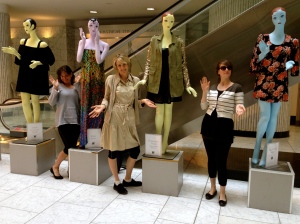 Our piece de resistance, shot on our way out, I’ve entitled “The Three Fashionistas,” a timeless portrait of us posing amongst the fashion dummies in the lobby of the California Mart, taken by a complete stranger with my iPhone.  There are no doubt universal themes and messages, none of them particularly meaningful, embedded in this exquisite portrait that perfectly and brilliantly captures our wildly entertaining and wacky Girlie Adventure.

2 thoughts on “My Girlie Adventure Morning”