A few weeks ago I came home to find my husband working intensely on the computer. I knew he was behind on a few projects that he was having trouble focusing on, so I was glad to see him so locked in.

“Hi! Are you working on the Treasurer’s Report? Or maps for our trip?”

“Nope,” he mumbled, barely looking up, “my bracket.”

Oh, geez, I thought. It’s here again – the NCAA tournament, arguably my husband’s happiest time of year. My usual mild annoyance with the upcoming prospect of 3 straight weeks of nonstop basketball turned to abject terror as I realized I would no longer have the job or the office as my quiet space. With the lucky exception of a silent retreat weekend I booked for myself and a mens retreat he booked for himself, this year I would be living full-time in the thick of March Madness. And what I subsequently witnessed really was a curious form of madness. 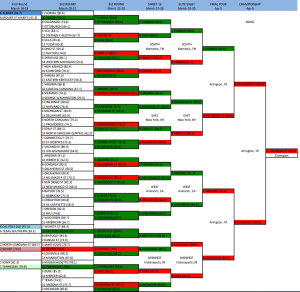 Over the next few days my husband consulted websites and churned out spreadsheets and schedules and brackets, placing his annual wager with his brother, with the intensity ratcheted higher by the addition of the Warren Buffet $1 Billion Bracket Challenge.

And then the tournament began. There are something like 46 games played the first few days. I am pretty sure my husband watched most of them. Sometimes he watched one on the TV, another on the computer, another on his iPad. When I walked by the bathroom, I heard a game on an iPhone through the door.

The farther his favorite team (UCLA) advanced in the tournament, the more emotional he became.  After UCLA won their first game against Tulsa, my husband immediately began talking about the Bruins winning the national title, which usually made him misty-eyed just thinking about it. It seemed that several teams from the Pac-12 (his favorite conference) went farther than expected. It was shaping up to be a magnificent tournament!

In order to pace myself, I usually don’t pay much attention until the Sweet Sixteen or Elite Eight rounds. I enjoy watching a game or two at a time, but not 34. So, when I was home, I spent most of the first week quarantined in the den with plenty of reading material while my husband sat transfixed by the TV. From the other room, I would hear yelling (presumably at the refs or players) or hooting and hollering (probably at a great shot or block or play). It actually made me smile to be witness to this odd form of insane joy. It was rather touching to see my husband so enthralled – like my son used to be with Pokemon or Power Rangers.

I have seen statistics, which in the past I assumed were overblown, demonstrating a downturn in workplace productivity during March Madness. I never paid them much attention since I was apparently part of the minority actually working non-distractedly during the tournament. After personally living the full March Madness effect, however, I can now totally agree that it impairs concentration on non-basketball activities.

For 3 weeks, during meals, car rides, walks, most of our conversation revolved around the tournament. My husband would randomly blurt out his latest thoughts on UCLA, scouting reports on players and match-ups with other teams, bad calls by the refs, etc.   He was obsessed.

UCLA won their first two rounds and the team was then set to play the overall #1 seed, Florida, in the Sweet Sixteen round. My husband was certain UCLA would win and approached the game like a four-year-old heading to Disneyland, barely able to contain himself. San Diego State (my home-town team) also made the Sweet Sixteen, playing Arizona, so I decided to really start watching and rooting in earnest for these two teams (although my husband informed me the SDSU Aztecs were dead to him since they were playing Arizona from the Pac-12).

And then the madness ended as quickly and abruptly as it began. At the end of the night, my poor husband sat dejected and heartbroken after Florida beat UCLA. And following the next round, there were no more Pac-12 teams left. At the conclusion of the UCLA game, he solemnly declared that his heart was no longer in the tournament, and there was no further reason for him to watch.

We did, of course, watch the rest of the tournament, somewhat somberly (still grieving for UCLA) but with reverence for the survivors. I now feel that I have been properly inculcated into the full March Madness experience. I marvel at the level of fan intensity and have a heightened respect for the emotions provoked by this tournament. The “thrill of victory and the agony of defeat” is a gross understatement. But you know what? There’s something oddly appealing about this madness. Maybe next year, I’ll fill out a bracket.