I wasn’t really looking forward to my birthday this year. It’s the birthday before a major milestone, and the dread is starting to set in. Dear Lord, I’m getting old.

In the spirit of the best defense is a good offense, I first thought about throwing myself a party, but decided that was too much work. In the end, I asked my husband to take me to Disneyland for my birthday. We hadn’t been in several years, and even though we live less than hour away, I find it too expensive to justify a visit for no good reason. But a birthday celebration with my husband seemed just what the doctor ordered, and a very youthful thing to do.

Despite my angst, I had a wonderful birthday. My husband went above and beyond. He gave me two mushy cards, bought me flowers, made me a cake AND took me to Disneyland. And, may I just say, a full day at Disneyland is not for wimps. And, may I further say, we put in a FIFTEEN-HOUR DAY at Disneyland.

The alarm went off at 5:30 am. We were in the car by 6:10 on our way to the Original Pancake House in Anaheim. After a breakfast of German pancakes (him) and Belgian waffle with strawberries and whipped cream (me) we were on our way to The Happiest Place on Earth.

Right when we left the restaurant, as we were driving to Disneyland, my son called from Florida to wish me a happy birthday. PERFECT timing!   By the time we parked, took the tram, went through security and lined up at the gate, it was 9:00 opening time.

We had a longstanding tradition in my family, whereby my brothers and I would, upon first entering Disneyland, run (as in full sprint) to the Matterhorn. I decided my husband and I should uphold this ritual, forgetting how old I am and that I just ate a Belgian waffle with strawberries and whipped cream. (My son had also reminded me on the phone of an ill-fated and short-lived attempt, in my forties, to join an adult soccer league, when I pulled my hamstring the first day attempting a wind sprint.) My birthday sprint became a jog, then a brisk walk, but we quickly and impressively made it to the Matterhorn in one piece.

I’d also done my advance research and learned of a Disneyland app (that I downloaded on my iPhone before we left home) and a new feature called MaxPass that can be purchased for $10 per person once in the park. I signed us up for MaxPass through the app while standing in line at the Matterhorn, which allowed me to obtain FastPasses for both of us from my phone for the day. Thanks to our first FastPasses, we walked off the Matterhorn and boarded our spaceship at Space Mountain in less than 15 minutes. While in the short line at Space Mountain, I signed us up for Star Tours.

At this point, between the pancakes and waffle, the run to the Matterhorn, and the rides on the Matterhorn, Space Mountain and Star Tours (all in quick succession of about 45 minutes) we both wanted to throw up.  I realized there might actually be a good reason long lines were invented at amusement parks, and decided the FastPasses had the very real potential of killing us if we weren’t careful. So, in the interest of pacing ourselves, we headed over to New Orleans Square and did the more soothing Haunted Mansion and Pirates of the Caribbean. 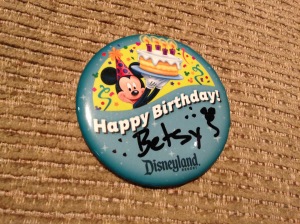 Before we left Tomorrow Land, my husband scored me a “Happy Birthday” button from a park employee, who even wrote my name on it, and which apparently conferred on me some joyful-spectrum Super Power. The rest of the day, as I walked around Disneyland wearing my button, virtually every Disney worker I encountered cheerily exclaimed “Happy Birthday, Betsy!” On the Jungle Cruise, the guide had the entire boat sing Happy Birthday. At Indiana Jones, the attendant led the crowd in a rousing cheer for me. After a lunch of massive smoked turkey legs (another family tradition) I set off in search of a restroom, and the two Disney crew members I asked directions from both pointed me toward the Women’s Room and then gleefully wished me a Happy Birthday. I met several other people who shared my birthday (most of them under 10). All this attention was wonderful! Why had I never thought to celebrate my birthday at Disneyland before?!

Thanks to MaxPass and my husband’s stamina, we were able to ride every ride we wanted, enjoy a fabulous dinner at the Grand Californian Hotel, watch two parades (including the Main Street Electrical Parade) and stay for the most beautiful fireworks display over Sleeping Beauty’s Castle.

During the course of the day, I reflected on my lifetime of visits to Disneyland. I was probably four or five the first time my parents took us to the Magic Kingdom. I still remember, as a kid, being so excited that I couldn’t sleep for several nights before. The first time after “It’s a Small World” opened, when I was a pre-teen, I was so captivated I insisted on riding the ride seven times in a row…and my mother happily rode with me. I went to my high school Grad Night there for an all-night giggle-fest with my boy-crazy girlfriends.  I visited as a small child, as an older child, as a teenager, as a young adult, as a newly married couple, as a mother of a small child, then older child, then teenager, and now as an empty nester. Each outing was special, and so different depending on my current phase of life, but Disneyland is by far the most magical through the eyes of a small child – whether the eyes were my son’s or mine.

At 10:45 pm, we finally headed for the car. I was grateful that, adorned with a Happy Birthday button and treated like a Disney Princess for a day, I recaptured a bit of that old Disney magic, and that my real-life Prince Charming was there to drive me to our castle.

8 thoughts on “A Disney Birthday”