Often, the saying is uttered in exasperation to describe a never-ending irritant. But, I recently discovered I am grateful that some things don’t change.

Two dear friends from college visited me this past weekend. Lynne was my first roommate in the dorm, and Devie lived down the hall. I met both of these women when I was eighteen, my adult self still very much a work in progress.

The first day I met Lynne, she came bounding into our dorm room carrying a field hockey stick in one hand and a tennis racket in the other. Before her dramatic, high-energy entrance, I warily scrutinized the photos already hung on her side of the room, which were mostly of pigs. She later clarified that she was a P.E. major (which explained the multiplicity of sporting equipment) and had been in 4-H (which explained the pigs, whom she proudly declared were named Aristotle and Socrates).   Over the course of our college years, I found Lynne to be uproariously funny, whip smart (she later changed her major to biology), with an almost insatiable curiosity, and a great problem solver. She was our unofficial dorm den mother, a natural caretaker with her calm wisdom and ingenuity.

I met Devie in my Art History class. She was physically striking, talented, creative, slightly neurotic, and I found her endlessly entertaining. She was an art major and a gifted pianist. I spent weekends at her Jewish parents’ house, and she was highly skilled at discussing and dissecting (often inventing) problems (hers and mine) until we were both near exhaustion.

Last weekend was the first time in 37 years that the three of us had all been together. Although Lynne and Devie became two of my closest friends during college, after I graduated and continued to law school and then moved to the east coast for a period, I largely lost touch with them until recently. I was curious to see how much we’d changed, both individually and as a trio.

We quickly discovered that the essence of who we each were at eighteen had not changed, and that we eased almost immediately back into our comfortable, safe friendship. Thirty-seven years later, Lynne is a retired science and special education teacher, married to a deaf Native American man, who lives on a chicken farm in Tennessee and is currently building a fence. Devie is an art therapist who is even more beautiful now than in college, works with children and teens in the Bay Area and is still highly conflicted about many things. They both found their callings, perfectly predictable based on their eighteen-year-old selves. They both claimed that my successful legal career was completely foreseeable (even though I began college as an interior design major).

My weekend also wonderfully illustrated teachings from a recent Alive and Well Women workshop entitled “Deepening Connections” in which my friend Cissy spoke about self-compassion. We talked about how we, as women, are often more compassionate with others than with ourselves. We explored the power of female community, and the healing that takes place when we find those friends to whom we can safely confess our self-loathing, our fear, our shame, our needs, and from whom we can receive loving empathy and compassion. 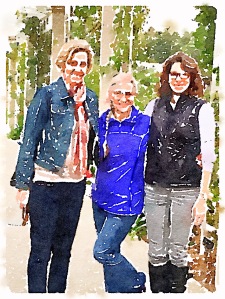 With Devie (far right) and Lynne (middle), back in my world

After three solid days of each other, in which we laughed (much) and talked (a lot) and even cried (some), Lynne, Devie and I shared how affected we each were by our weekend together, both emotionally and physically. The best that I can describe it, for me, is that I was not changed by this deep re-connection with my old friends, but anchored. An important part of me, deep inside, never lost but perhaps unnoticed, was re-aligned, reinforced. Through speaking our fears, our shame, our needs to each other, and finding the solid core of our friendship still trustworthy and strong, it became a deeply comforting, healing, and spiritual experience of compassion.

It was also great fun for my friends (and for me) to get a glimpse into my current life.   I took them to my yoga class and my favorite brunch restaurant and we walked around my neighborhood. We’ve now decided to make this an annual event. Next year, whether chasing chickens in Nashville or doodling with crayons in Palo Alto, I will be joyfully discovering new friends in my old.

4 thoughts on “Some Things Never Change!”