And…we’re off!!! On the Great American Road Trip. Our first night was spent at my sister-in-law’s house in the Bay Area. The next day we crossed the San Francisco Bay Bridge and drove to Sacramento, where at twelve noon, ON THE DOT (not planned, but how dramatic!) we hit the start of Route 50 and the Official Route 50 Road Trip began.

The beginning of Route 50, just west of Sacramento, CA

From Sacramento, we drove to Fallon, NV. Our scheduled lunch stop was in South Lake Tahoe, CA at the Red Hut Cafe. The Guidebook urged a stop here at the circa 1959 cafe – the original of several locations. As we pulled up, the neon “Open” light suddenly switched to “Closed” and my heart sank, worried this did not bode well for our trip. I pulled out my iPhone ready to locate another restaurant, when I noticed 3 women milling about in the café and jumped out to talk to them.   These incredibly friendly women (who worked there) informed me that the café just closed but there was another Red Hut right down the street, which was still open. We proceeded to the other Red Hut and had a lovely lunch overlooking Lake Tahoe.

After tooling around stunning Lake Tahoe a bit, we continued to Fallon for the night (crossing the Nevada border at 3 pm ON THE DOT). Up to that point, I hadn’t covered any new ground. Beginning in Fallon, I saw new sights, including the Fallon Naval Air Station (which hosts the Top Gun school) where my son may be stationed someday.

Also beginning in Fallon is the stretch of Route 50 dubbed “The Loneliest Road in America.” By the end of that day, we completely understood the moniker. Between Fallon, NV and Delta, UT, we encountered 410 miles of generally straight road, sagebrush, mountain and blue sky. We rarely saw other cars or people. There was no Internet coverage. Our lunch stop was in tiny Eureka, NV, where our waitress told us that her entire graduating high school class consisted of 17 students. While the school offered sports, the students had to play all of them to field enough players for the teams.

The scenery was striking, but hour after hour of relative uniformity became monotonous. I amused myself initially by taking pictures with my iPhone. After 30 or 40 landscape photos looked identical, I switched my focus to Route 50 signs. I found myself increasingly dazed, and the Route 50 signs snuck up on me. It was not easy taking clear photos at 70 mph through the car window or windshield, with the reflection and the GPS and radar detection in the way. Add my trance-like state, and dull reflexes, and an extensive library of blurry Route 50 sign photos resulted. 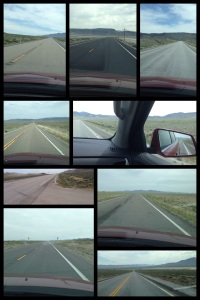 My next coping mechanism was my Easter chocolate. After 6 dark chocolate eggs and a marshmallow patty, I felt alive again with the sugar coursing through my veins. After a couple more hours, however, the blood sugar plunged and fatigue really hit us. So we reverted to our secret weapon – Disney songs. For the next few hours, we sang along with our entire Disney Collection at the top of our lungs. From Sleeping Beauty to Jungle Book to Mulan to Pocahontas, we sang all the parts, amazing ourselves at our mastery of the lyrics (from all those years of Disney music when our son was younger).   We came alive!   We had fun! We were silly! Thanks to chocolate and Disney, the Loneliest Road in America turned out to be anything but, and a surprisingly splendid start to our Great American Road Trip.