We just returned from a weekend in the Washington, D.C., area, specifically Annapolis, MD, where we experienced some of the best and the worst of our country.  The purpose of the trip was threefold, to: (1) visit our son, a Midshipman at the US Naval Academy in Annapolis; (2) attend the Navy-Air Force football game; and (3) participate in President’s Circle Weekend at USNA.  The Presidents Circle is comprised of donors to the USNA and the weekend is intended to honor, entertain and provide information to PC members.

There have been government shutdowns in the past, but never have the service academy sporting events been affected.  I also learned that Navy uses no appropriated funds and Army and Air Force only minimal amounts to support their football programs.  Basically, some of America’s finest student-athletes who are under already enormous pressure to fulfill their academic, physical, athletic and military obligations were being used as a political football (literally and figuratively) to impose additional pressure on the partisan process. After 36-48 hours of wrangling, it was announced that the Navy-Air Force as well as the Army-Boston College games would be played.  Future academies’ sporting events, however, are still in limbo.

With all this as a backdrop, we landed late Thursday evening at Dulles airport and drove through Washington, D.C.  I was reminded of how beautiful the city is, particularly at night with all the floodlit monuments.  I feel very proud and patriotic when I visit Washington and see the Washington, Jefferson and Lincoln memorials, but this time I felt a profound sense of shame and sadness as I considered the resident stupidity superimposed on a city resplendent with beautiful tributes to our democracy.

On Friday, we participated in a full day of President’s Circle meetings.   The Superintendent of the Academy addressed us, barely containing his anger and frustration with the shutdown beneath his usual impenetrable and optimistic cheerfulness.  He reported that, for the first week of the shutdown, the military instructors were pulling double-duty shifts, covering as best they could for furloughed civilian professors. Even so, about 20% of classes were cancelled, and that number would rise to 50% if the furlough extended into the second week.  Midshipmen (who must finish their schooling in four years) that are majoring in certain areas where departments were hit especially hard by the shutdown, including Chemistry, are in danger of not qualifying for specialized degrees if the shutdown continues much longer.  It was clear that the Superintendent had spent a significant portion of his week not focused on strategic direction, but instead at the Pentagon negotiating for a football game and resources and throwing together contingency plans to provide basic needs to the Brigade of Midshipmen.  In fact, the technical crew that should have been at Alumni Hall to run the sound and media had been furloughed, so members of the Navy band were filling in.

In contrast to our experience of the bad and the ugly, we also experienced the good.   I had lunch with two female Midshipmen who refused to be discouraged by the shutdown.  They shrugged it off, expressing confidence that things would work out and, in the meantime, described how the entire USNA community was banding together to help each other, including tutoring, coaching, and mentoring.  In larger terms, they spoke of their excitement and pride at being at the Naval Academy and their desire to serve their country.  I asked about their experience being female at the Naval Academy and both found the Academy to be a more supportive environment than they had anticipated.

Saturday was game day and, as usual, my husband and I attended his USNA Class tailgate before the game.  At the tailgate I met two gentlemen – one a USNA classmate of my husband’s who had been a Blue Angel, and the other, an USAFA graduate who had been a Thunderbird.   They had met during their concurrent Blues/T-Bird tours of duty and have been fast friends ever since.  Unexpected encounters like this are what I love about visiting Annapolis. As a bookend to the Mids with their whole career in front of them, I love hearing the veterans describe with love, sadness, excitement, wistfulness, regret, but always pride, their military careers. 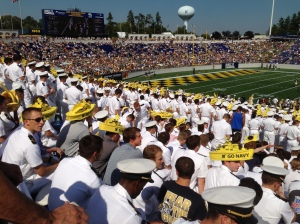 And then it was time for the Game That Almost Didn’t Happen.   A sellout crowd, setting a home game record, poured into Navy-Marine Corps Memorial Stadium on a beautiful balmy day in Annapolis.  We took a break from partisan bickering and all of us, Democrats, Republicans and Independents, watched the young men from Navy and Air Force play a game of football.  A game that means a lot to them and to service members around the world.  A game that likely will determine which Academy wins the Commander in Chief Trophy and a trip to the White House.  A game that should not have been used as a bargaining chip by warring factions in Washington. We watched the Midshipmen; wearing goofy yellow foam ship hats, jump for joy as their team defeated Air Force 28-10.  And in the end, I resolved that I’d like to find a way to use my time and talents to provide constructive reform to the political process in our country.  I want to support our young people in the military who are putting their lives on the line every day to protect us, and I want to support the future leaders of our country to whom we are handing a very broken world, and, mostly,  I want to feel proud again when I drive back from Annapolis through Washington, D.C., to Dulles airport.